Cowboys to face struggling Plano East in push for playoffs 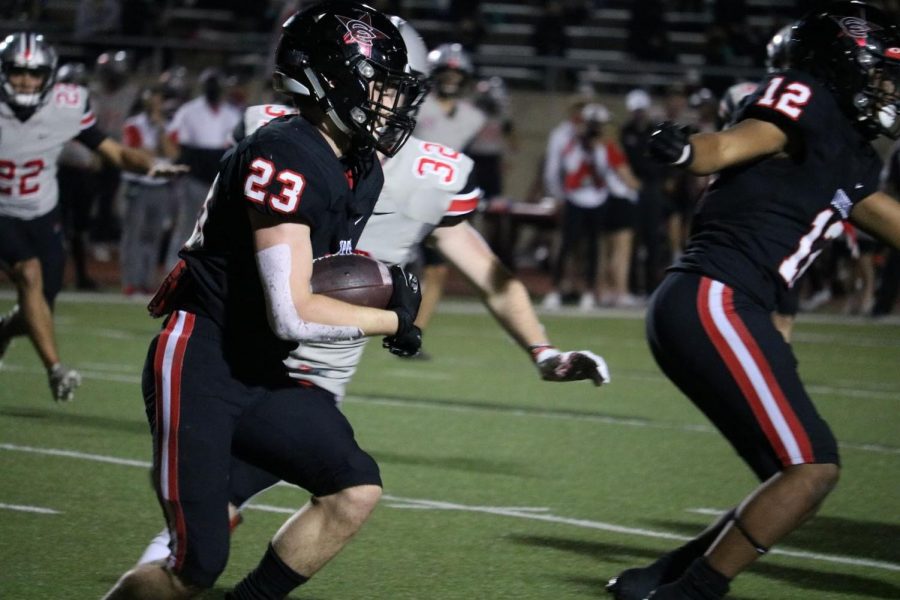 Coppell sophomore defensive back Matthew Williams returns an interception off Marcus senior quarterback Garrett Nussmeier on Nov. 6 at Buddy Echols Field. Williams is one of many multisport athletes, competing in football, track and baseball.

Having only practiced once in the last two weeks (due to Coppell High School and CHS9 closure and the cancellation of the Hebron game the week prior) and suffering its worst loss of the season against Lewisville, the Coppell football team has been impacted by a lack of recent game experience following the recent COVID-19 outbreak.

However, its next opponent in Plano East Panthers is also facing a lack of recent game experience, as the Panthers matchup against the Plano Wildcats last Friday was also canceled due to a confirmed case of COVID-19 on the Wildcats.

The Panthers are yet to win a game this season with losses ranging from close-calls to blowout defeats with their pass offense not matching up with their run offense. The Cowboys’ defense can take advantage of a misfiring Panthers’ pass offense, with Plano East throwing eight touchdowns and four interceptions all season.

“We know that [Plano East] is 0-7 but that doesn’t matter,” Coppell junior wide receiver Dylan Nelson said. “Any team can be beat, we have to come out with the right mindset and be ready to play.”

However, the biggest challenge the Cowboys will see in tonight’s game is the Panthers’ dynamic junior running back and wide receiver Ismail Mahdi who has rushed for 922 yards and seven touchdowns on 116 carries, in addition to 458 yards and three scores on 28 receptions earning him an area ranking.

Adding onto the dynamic threat Mahdi presents to any opposing defense through the air or running, he also provides an unexpected passing threat as well, having thrown a 64-yard touchdown pass this season. Powered by Mahdi, the Panthers are area-ranked in both overall offense and rushing offense as well.

“If we are able to stop the run then we will have a very successful Friday,” Coppell junior defensive back Isaiah Nichols said. “We plan to shut down their running back and shut down all their running games [because] they don’t really have a threat [outside of him].”

As the season winds down, each and every game grows more crucial with potential playoff seeding being in the balance.

The Cowboys currently hold fifth place in a competitive district that has seen many game cancelations during the last several weeks, potentially altering classic playoff qualifications. With Flower Mound Marcus having an undefeated overall record, Lewisville’s 3-1 district record propels them into sole possession of second place.

Contention for the remaining two playoff spots are a little more murky with Plano West, Coppell, Plano and Hebron all in the race. Flower Mound and Plano East have both been eliminated from playoff contention with four losses on their respective district campaigns.

As the last couple weeks of district play come to a close, the following matchups will most likely determine District 6-6A playoff seeding: Hebron at Plano West and Flower Mound Marcus at Lewisville on Friday as well as Plano West at Plano and Lewisville at Hebron on Dec 4.