A Lone Patriots Fan in Texas 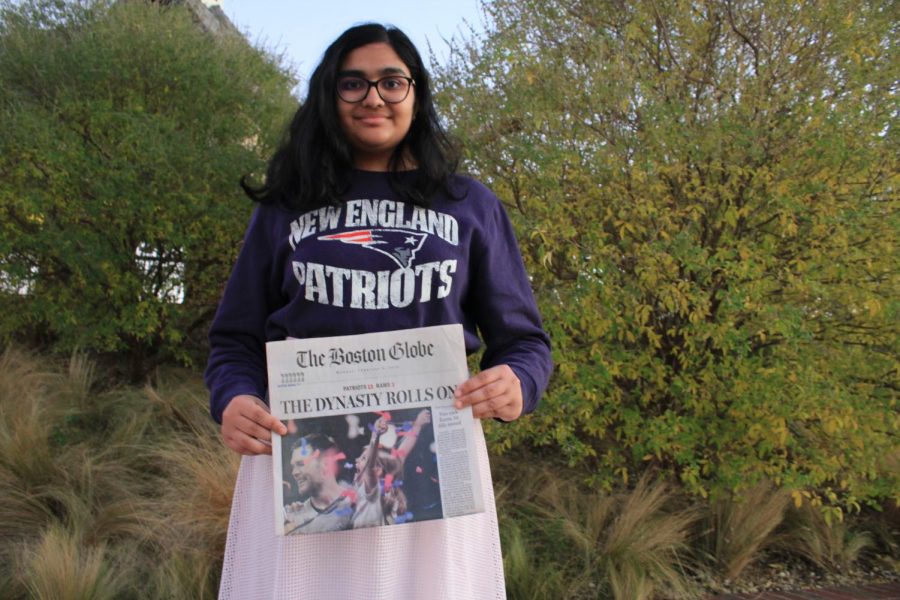 It is hard to be a New England Patriots fan in Texas. Sports are typically a connection point; people commiserate over the shared joy of a win and sit in silence together after a major loss.

How do you do any of those things when you support one of the most hated football teams in the league?

I’m from Boston. When I lived there, I used to walk into school the day after a big game – especially a Super Bowl – excited to gush about the game-winning plays the Patriots had made. Now, I walk into school in my Patriots sweatshirt, and people roll their eyes at me.

Should I have changed my loyalties when I moved here? Are team loyalties adaptable, and should they be?

I always thought I would be a Patriots fan my whole life. I grew up watching their games. I never wanted that to change, because even though I’m not in Boston anymore, I feel connected to my roots there when I root for the Patriots or Red Sox.

I am not, however, the only sports fan in this boat. Coppell High School AP world history  teacher Michael Erickson is a fan who hails from Ohio.

“I was born up there, and my dad was a fan of Cleveland teams along with my grandpa and all my uncles,” Erickson said. “It’s in my blood.”

Sports have always been a family tradition for Erickson. Although he was the biggest fan in his family, everyone around him followed, watched and supported the same teams. When he moved to Texas, it was unfathomable for him to change that tradition, to cheer on another team.

While sports usually unite people, rivalries can get in the way of friendships. Rivalries don’t always get personal. However, when the game is on, it’s every fan for themselves, and insults and jabs can – and likely will – fly. But the love for the game can conjoin even the deepest of rivals.

“My favorite part about sports is that it leads to so many conversations and can build relationships.” Erickson said.

It’s almost undeniable that it would be easier to start a conversation with a fan when you have more than the sport in common. When you have the same favorite team as someone else, the conversation moves past the game and into the team itself.

As one of the only Patriots fans around, I haven’t raved about a miraculous game or an amazing player outside of my house. If I supported the Dallas Cowboys instead, that wouldn’t be the case. Making friends with other football fans would be simpler, because there wouldn’t be an initial barrier created by supporting different or rival teams.

“I would probably switch teams, to someone that’s popular over there,” New Tech High @ Coppell sophomore Juan Cordova said.

Cordova supports the Texas Rangers and the Dallas Cowboys. It would certainly be easier to join him in these loyalties and abandon the Red Sox and Patriots. After all, in spite of rivalries between opposing teams, sports bring people together more than anything else.

“Sports always unite people in a way,” Cordova said. “They get people to come together and just enjoy watching a game.”

At the end of the day, it is just a game. But it’s also a dramatic story played out in real time, with no scripts or direction. It puts everyone on the edge of their seats out of natural instinct to find out what happens next.

“It’s a catalyst for people to sit there and be with one another,” said CHS Coppell assistant football and baseball coach Lincoln Hanke, a fan of the Dallas Cowboys and Texas Rangers.

Sports are unifying. When it comes to the game, there is no better human drama on television. In regards to the teams, fellow fans can become close friends. I may remain a fan of New England and Boston teams for the rest of my life, but I get excited about any game-winning play, regardless of what team made it.

Unless, of course, they were playing against one of my teams.