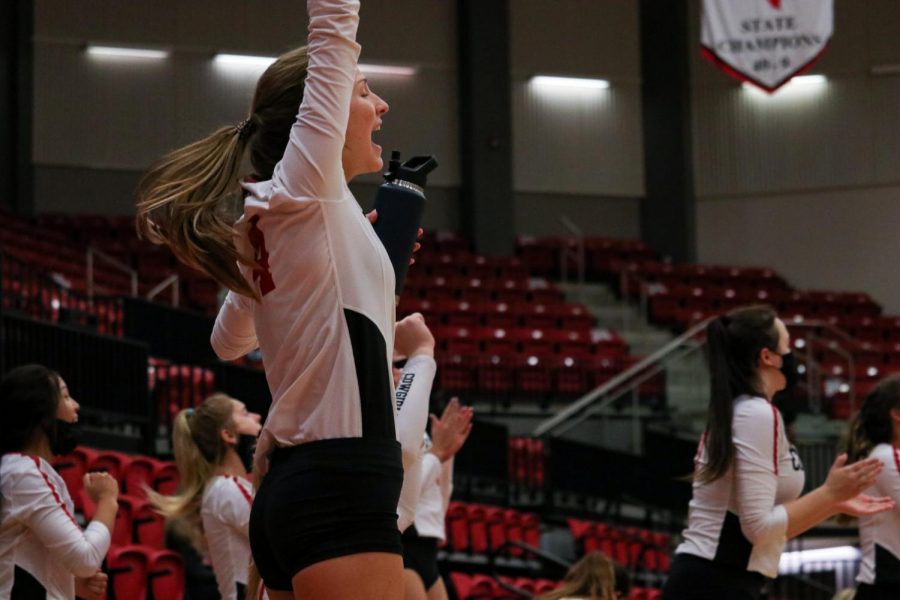 Coppell right side hitter Abigail Hendricks and her teammates cheer on the Cowgirls during the game in the CHS Arena on Saturday. Plano West defeated Coppell 2-3.

After Coppell’s three saved set points in a last-minute attempt to claim the match before it went to a fifth set, a kill from Plano West’s famed pin hitters shifted the match in its favor. Heading into a fifth, Plano West took hold of the match, winning 21-25, 25-16, 22-25, 25-23, 15-11, on Saturday at the CHS Arena.

Despite staying true to its scatter report, which allowed them to place balls easily, two of Coppell’s serve-receive rotations led to its eventual downfall.

“It’s up to those two rotations and being able to execute and end their run so we can move on from it,” Coppell junior right side hitter Abby Hendricks said. “We would get a run for ourselves and then get beaten back down. We need to keep practicing in a competitive environment so we can be stronger in those two rotations.”

Still, the match showed a vast improvement for Coppell, which struggled in the past with game time adjustments.

“As they adjusted their defense, we adjusted ours so we could continue to be successful,” Coppell junior Haley Holz said. “After having won the first set, they had to adjust a bunch of stuff so we were able to communicate and identify what they changed so we could play accustomed to that.”

“We ran our middles a lot too, which was helpful because they’re a pin team, they don’t know [how to] defend that well,” Hendricks said. “We were taking advantage of their weaknesses with our strong suits.”