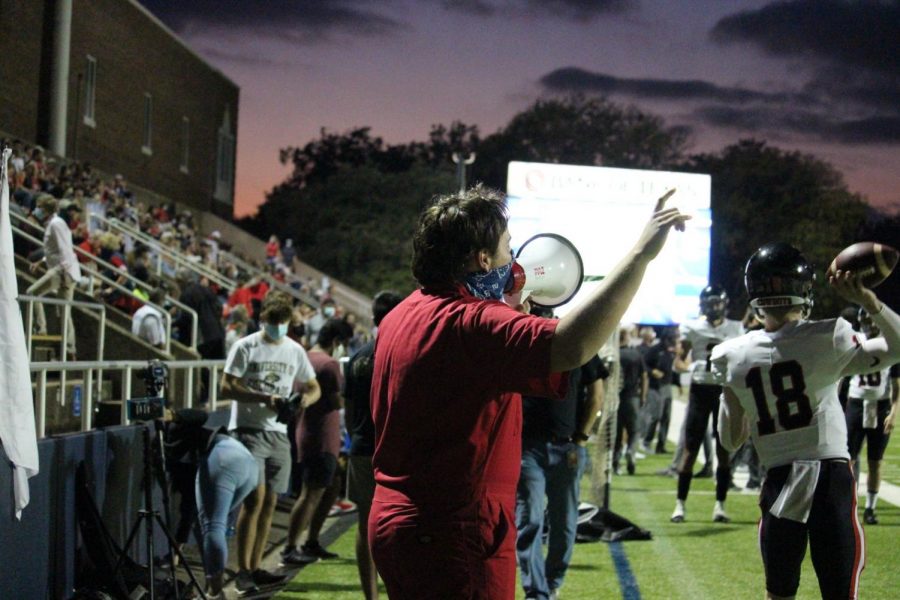 Coppell High School senior Plunger Boy Ryan Tompkins cheers from the sidelines during Coppell’s game against Highland Park on Oct. 9 at Highlander Stadium. In the midst of a pandemic, Tompkins leads the student section and cheers Coppell in their victory.

With the large, white megaphone in his left hand, Coppell High School senior Ryan Tompkins fires up the crowd and cheers for the Cowboys to win the game.

Two weeks before the 2020-2021 school year began, Tompkins received a call from last year’s Plunger Boy, CHS 2020 graduate Leo Swaldi, asking him to become the new Plunger Boy for the student section and carry on the CHS tradition.

“From the very beginning, Ryan expressed interest in becoming the next Plunger Boy,” Swaldi said. “Seeing Ryan at every game last year, yelling out every chant, affirmed my thought that he should be the next student to carry the plunger at Coppell High School.”

The role of Plunger Boy dates back to 1998, where the rivalry between Southlake Carroll High School and CHS was prominent. The first Plunger Boy Luke Pierson was introduced as a way to cheer on the Cowboys to victory while riveting the other team because CHS was considered a “lower class” school compared to Southlake Carroll.

The Plunger Boy hands down the plunger to someone in the class below them so that the tradition is carried on each year.

“It’s been kind of funny to watch, and we have had some remarkable kids being Plunger Boys,” CHS Principal Laura Springer said. “They’ve done a great job of getting a school spirit, going and yelling, so it’s worked.”

Tompkins is cheering the student section on this year during the COVID-19 pandemic, where limited amounts of students and teachers are allowed to attend football games.

“I think about how we can make the student section as loud as possible,” Tompkins said. “We are doing a good job as a lot of people have shown up to Highland Park.”

Not only is Tompkins known for his position of Plunger Boy, but he is a Coppell baseball player and a member of the IB [International Baccalaureate] program.

“Especially with IB involved, it has definitely been a challenge,” Tompkins said. “Thankfully, my teachers assign less work on Friday’s when I have football games, so I can do both.”

As the Plunger Boy for CHS during COVID-19, Tompkins still plans on continuing student section events. He hopes to keep the games as entertaining as possible, despite procedures and regulations.

“All the traditions are going to continue,” Tompkins said. “We are doing blackouts, powder games and themed events for the football games. Since a lot of people are showing up and people are having fun, we are going to keep trying as much as we can.”