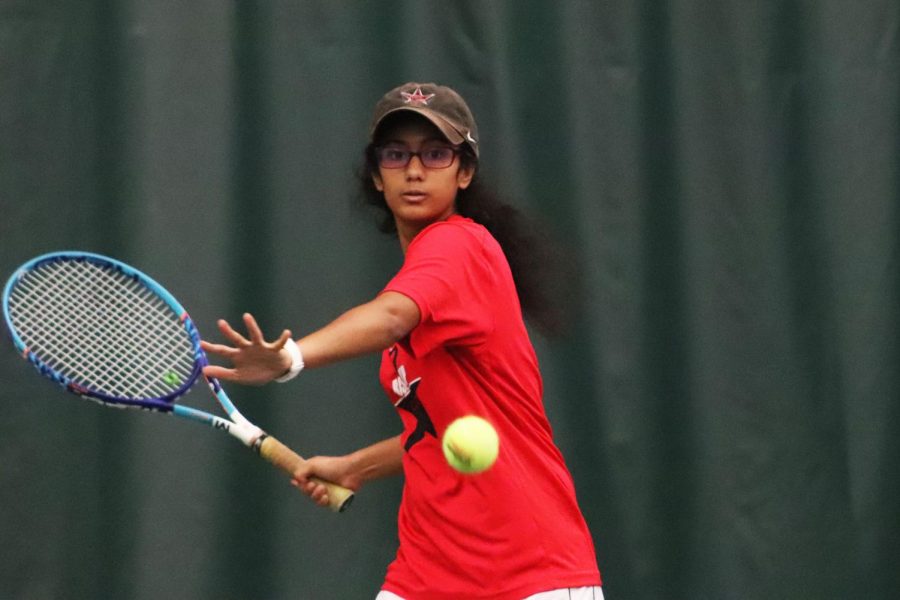 On Monday, Coppell tennis defeated Prosper in the first round of the Class 6A Region I playoffs with a score of 10-2. The win means Coppell advances in the playoffs.

The match was originally scheduled for 4 p.m. at the CHS Tennis Center, but rain resulted in a change of venue to the T Bar M Racquet Club in Dallas at 8 p.m. Coppell tennis players believed they would be facing Prosper on their home court, so adjusting to an indoor court presented an additional challenge to the match.

Coppell is tentatively scheduled to play the winner of Thursday’s Richardson Lake Highlands-Arlington Bowie match at 8 a.m. on Friday at Hebron in the area round.

“It was weird not being on our home court like we expected,” Coppell sophomore Lindsay Patton said. “With [the game] taking place indoors, the team was separated a bit more and there wasn’t the same kind of energy in the atmosphere.

“I want us to make it far in the playoffs, so it was good getting that first win and starting our playoffs journey.”

After doubles, Coppell was up 5-2, which set the team up for success through the singles matches. Coupled with the sweep on the boys side, the unexpected win in girls doubles resulted in a dramatic win for Coppell.

“Our girls two doubles were able to step up and win that match, which made us very relaxed after doubles,” Coppell tennis coach Rich Foster said. “The pressure was on Prosper at that point, and we sailed through singles.”

Since this is the first season for Prosper in Class 6A, Tuesday was the first time Coppell faced the Eagles.

“For the last few years, we weren’t interested in playing them because they were a smaller school so they didn’t have the same talent level,” Foster said. “That’s changed and they’re on our radar now. In my estimation, they’re going to be one of the top teams in the state in the next few years.”