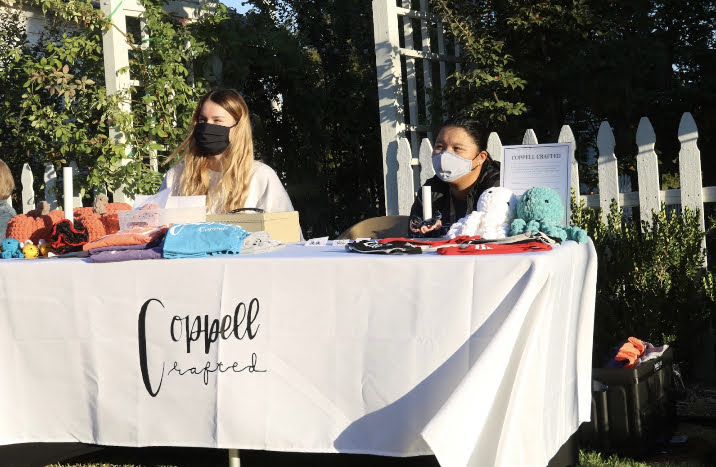 New Tech High @ Coppell sophomore Payton Hoenig and Coppell High School sophomore Reagann Stolar sell handmade products for their business, Coppell Crafted, on Saturday at Old Town Coppell. Stolar and Hoenig started Coppell Crafted as a hobby and developed it to help the city by donating a portion of profits to various charities and movements. Photo by Nandini Muresh

New Tech High @ Coppell sophomore Payton Hoenig and CHS sophomore Reagann Stolar launched their company, Coppell Crafted, after Hoenig created a scrunchie based off of a how-to video on YouTube.

Stolar, realizing they could take handmade creations to a whole new level, brought the idea of Coppell Crafted to light. Through lots of hard work, creativity and passion, the girls have built a successful small-business and donate a portion of their profits to charities.

Hoenig and Stolar started their business in May with the help of family and friends.

“Both of our parents helped and guided us through creating a small business and getting the word out.” Hoenig said. “We had a bunch of friends who were really supportive, bought products and told people about [Coppell Crafted].”

They began their launch via Instagram, their website, coppellcrafted.com, and advertising on social media. However, as happens with many startups, there were a few bumps in the road.

“We created a website and built [it in] about a month and a half.” Stolar said. “But, when we finally launched our website it crashed. [The] crash [happened] the day after we launched. We then made a new [website] in two days.”

“It’s hard [to balance my schedule],” Hoenig said.” “It’s hard balancing classes, clubs and school.The small business isn’t super stressful – it’s a creative outlet – something to work on in my freetime that I enjoy doing.”

Stolar and Hoenig sell scrunchies to donate to Christian Charities USA, ASPCA and Doctors Without Borders. Hoenig and Stolar chose these organizations to allow for a broad coverage of charitable missions. As dog owners, ASPCA became a clear choice. They also chose Doctors Without Borders due to the recent COVID-19 Pandemic to help those on the front lines and Christian Charities Association, which helps many charities and spreads Christianity throughout the world.

“[Hoenig and Stolar] have great character,” Campos said. “I think it’s good what they’re doing – donating some of [their] profits. Whatever you buy from them, you know you’re putting your money to a good cause.”